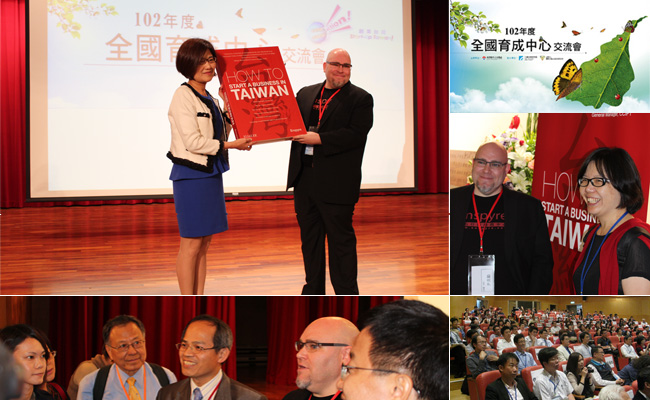 “How to Start a Business in Taiwan” was written by Elias Ek, founder of Enspyre, Taiwan’s leading B2B outsourcing company, with the help of two teams of employees and interns.

Published in early 2013, the first edition of How to Start a Business in Taiwan sold out almost immediately. Since its release, Elias has been invited to numerous events and gatherings, and has given several speeches about the Book and his experiences of being an entrepreneur in Taiwan.

Most recently, in April 2013, Elias and the team attended the Taiwan National Incubators Conference (102年度全國育成中心交流會) in Yilan, organised by the Industrial Technology Research Institute (工業技術研究院, ITRI). Elias gave a speech and donated a copy of How to Start a Business in Taiwan to each of the attendee incubators, totaling around 100.

The importance of foreigners for Taiwan’s economy
Elias related his own experience of doing business in Taiwan, spoke of the importance of foreign entrepreneurs in developing an economy (non-US citizens are a large part of the start-up community in Silicon Valley), and suggested how Taiwan can become a better place to attract foreign entrepreneurs. The reception Elias and the team received was overwhelmingly positive.

Speakers from other Government, semi-Government, and technology-related private enterprise also presented at the Conference. Attendees from Global TiC, the Institute for Information Industry, Business Next, and the Ministry of Economic Affairs attended the event. It was a valuable opportunity to network and expose “How to Start a Business in Taiwan” to people with influence.

One such initiative discussed was Start-Up Chile. Arranged by the Chilean Government, its motto is to attract world-class early stage entrepreneurs to start their businesses in Chile. Nominations from around the world are welcomed, and those chosen receive around forty thousand US dollars. It appeared that the attendees at the Conference are aware of the value of foreign entrepreneurs, and the need to attract overseas business into Taiwan; yet in the same breath, it is acknowledged that the political will does not currently exist to push ahead with meaningful change.

What if Taiwan became the Innovation Hub in Asia?
Let’s dream for a minute. How fantastic would it be if there were a Start-Up Taiwan, or something similar? People from far and wide would be attracted to Taiwan. Taiwan would be an exciting place to visit. And people would stay and contribute to the economy. It would pose an opportunity like no other: To brand Taiwan as THE innovation and technical hub of Asia. It would make Taiwan an even more attractive place to start a business. Taiwan’s laws are already quite favorable to foreign entrepreneurs. Geographically, Taiwan is perfectly placed. The economic climate suits entrepreneurship. Hardware manufacturing is already part of the economic landscape. We’re just missing the political will.

As one speaker at the Conference noted, Chinese culture and Confusionism do not necessarily favor entrepreneurship. That’s fine. But that doesn’t stop educated and ambitious people from other countries coming to Taiwan to start a business! Interaction between people with different cultures and ideas can only stimulate ideas and growth.

Elias was honored to be invited to speak at the 2013 Taiwan National Incubators Conference.

How to start a business in Taiwan – Incubator Congress from StartaBusinessinTaiwan