Is Taiwan the Right Place for Entrepreneurs? – Interview by Taiwan Aujourd’hui 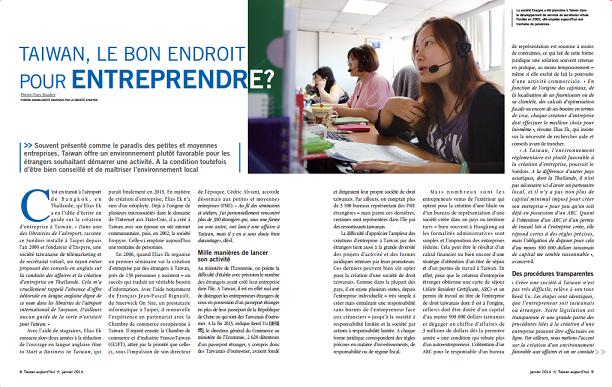 Often presented as a paradise for small and medium companies, Taiwan has a rather favorable environment for foreigners wishing to start a business, as long as you are well advised and able to master the local environment.

Elias Ek, CEO of Enspyre and author of How to Start a Business in Taiwan, was interviewed by the French magazine in Taiwan Taiwan aujourd’hui in January, 2014.

Here is a summary of the interview in English:

A Thousand Ways to Start a Business
The Ministry of Economic Affairs (MOEA) pointed out that it is difficult to know how many foreigners has edtablished a business in Taiwan.
At the end of 2013, 2628 persons with a foreign passport created and managed their own companies in Taiwan. There were also 3500 offices representing foreign SMEs.
Many entrepreneurs prefer to open an office or a subsidiary of a company established abroad.
To obtain an Alien Resident Certificate (ARC) and a work permit, a foreign entrepreneur’s company needs a capital of NT$ 50,0000 and an income of NT$3 million in the first year. Getting an ARC is easier when establishing a representative office.

Transparent procedures
Steps to create a business are the same whether you are Taiwanese or a foreigner. Legislation is transparent and a large part of the procedures for establishing a business can be done online. Moreover, there are no political interferences like what can be observed in China.

Lately, measures have been taken to reduce the time necessary to establish a business, but a foreign entrepreneur needs to wait for four to eight weeks to obtain an investment authorization.

According to Ek, the economic advantages of creating a business in Taiwan are: highly reactive suppliers, sufficiently large domestic market and that Taiwan is at the heart of logistics circuits.

An Underestimated Destination
Entrepreneurs rarely think about Taiwan when it comes to deciding where to establish their future business.
Most of the foreign entrepreneurs have been living in Taiwan for some time before creating their business.

When writing his book, Ek’s objective was not only to help foreigners create their business in Taiwan, but also to encourage the Taiwanese government to highlight the role played by foreign entrepreneurs in Taiwan.