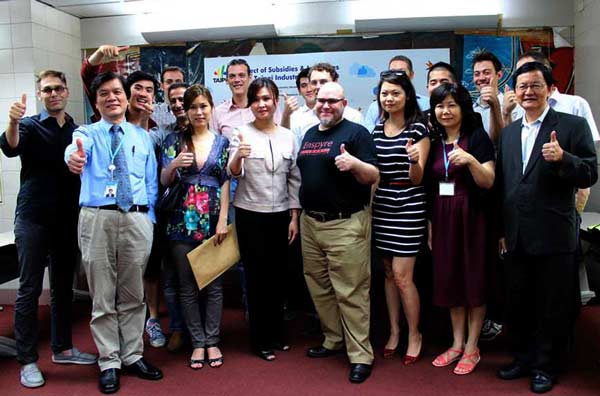 The Taipei City Government wants to invest in foreign and immigrant entrepreneurs with a sound business plan. For the right project they can provide grants, subsidies, consulting, mentorship and provide incubation services as well. The Department of Economic Development has whole a team ready to give you guidance.

Adam Bonnier, a Swedish co-founder of design firm Bonnsu that he started with his Taiwanese wife says -“we wanted a different location to reboot and rethink. We applied for the rent subsidiary and we got 50% [of rent paid] and we got a bigger office. Now we have a bigger office for the same price and we have hired new six employees.”

On the 18th of June, the Taipei City Department of Economic Development for the second year in a row organized an English language seminar about government grant and subsidiary specifically targeting foreign and immigrant entrepreneurs.The event started with a warm welcome by the deputy commissioner,madame Hsin – Pei WU.

There is a lot of money to apply from several different programs. Here are the more popular once talked about during the event:

Job training subsidy – We should all try to develop our company skills and the government is willing to pay to 50% of the cost of hiring in teachers. The courses have to be are related to the subject that the course grant was applied for as well as your company activities.
Newly employee Subsidy – most growing companies needs new employees and the government can help you by paying NT$10,000/employee/month up to a total amount of NT$5 million in a year.
Rental subsidy – Would a bigger space be just perfect for your business but you don’t have the budget? The Taipei government is willing to pay up to 50% of the rental fee up to NT$5 million.
Interest payment subsidy – If you need to take out loans to finance new investments in your business, the government might pay part of the interest payments up to NT$50 million.
So there are millions available. Except for Bonnsu mentioned earlier, several other companies that had successfully received grants and subsidies came to share their experiences.

The first company to speak was WooGo Juice. This California-style smoothie shop was founded by five young men from the USA. With no formal business experience they were able to strike a great impression in front of the judges. They mentioned how the judges were not looking at the project not only from a business point of view but for what they had to offer to the community. Luckily, WooGo Juice had planned from the beginning of creating a business model that would provide not only delicious smoothies to the customers but also great learning opportunities for their employees.

Then second person who came to speak was the Josh Hsiao, founder of Homey Hostel who described his project as “A small rabbit jump into a big jungle.” Because of his innovative take on the hostel concept which will bring more foreign tourists to Taiwan the government granted him a large rental subsidy for his hostel near the Taipei main station. He said he had not dared dreaming about such a great location but the government help made it possible.

The third person to speak was a spokesman from Applied Predictive Technologies (APT) Steve Huang. APT is the world largest cloud based predictive analytics software company and they had just established their Asian headquarters in Taipei partially because of the rental subsidy that the Taipei City Government had to offer. They also found Taipei city government reliable and helpful in setting up the office in Taipei.

The fourth company spokesman was the founder of Enspyre, Elias Ek who shared his experiences receiving a grant a few years earlier.Elias mentioned how he made several mistakes with their application that increased administration costs. One of those mistakes was to listen to try to put together a proposal that perfectly matched the grant criteria. He said instead they should have just described the project they really want to do. Another advice he mentioned was to read the accounting requirements early so not to end up with trouble with the end report.

The last person to share was Vivi Wu from MOTOAIR which specializes in creating airbag jackets for the safety of motorcyclists. She thanked the government for the subsidy that allowed them to grow and save more lives. The audience of entrepreneurs had many great questions. The first question was “Any other grants you plan or want to apply for in the future again?” The answer from all the companies on the panel was yes but that they would have to balance with the effort it requires and the amount they could receive. Then there was question asked by another gentleman ” How kind is the government?”

APT answered that first by saying ” The [Taipei City] government is more friendly and open minded than in other countries.” Elias, founder of Enspyre, said he has great experience communicating with the staff.
One of the points that was made repeatedly was that the Department of Economic Development can assign an English-speaking consultant to your case who can help guide you through the process. You still have to provide all information and applications in Chinese, but the consultant can help make sure you get it all.

The last question was interesting; as they say, you save the best for the last. “How long is the process? How long will it take? Just give me a number, how many hours?”
Steve from APT said it took about two months for them to sort out the application process. Then APT accountant answered that it took her 5 hours per day for 20 day.

Enspyre’s Elias Ek answered “We invested around 150 hours, but as I mentioned, we made things more complicated than it needed to be. ”

One official said “It depends on the proposal and on the mandarin skills on individual. Someone with a good level Chinese could be done with the process within a month.” The laws and regulations are all in Chinese and you have to get your English applications translated. Otherwise your application will not be accepted. WooGo Juice said they overcame their lack of Chinese skills by trading English lesson and dinners for translation help from their friends.

After the Q&A the event ended with about an hour of people mingling and sharing. Overall the event gave great vibes. Government should be careful with who and what it spends the tax dollars on, but if you have a great idea or a company ready to expand, contact the Taipei City Department of Economic Development and see if they have a suitable grant or subsidy to help. Here are the links below of the government website for grant and subsidiary:
https://www.industry-incentive.taipei.gov.tw/eng_Page_projintro.aspx
http://english.doed.taipei.gov.tw/

Here are the links of the companies that spoke at the event: