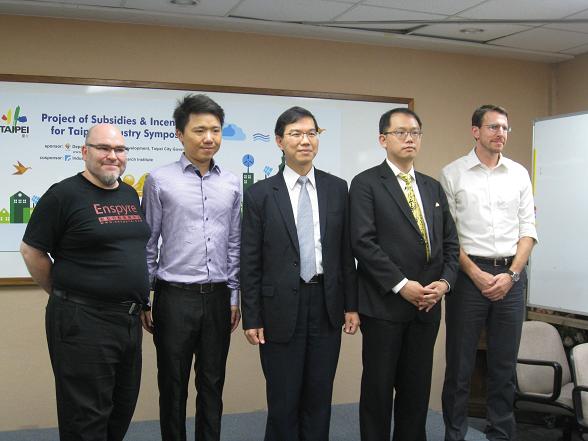 How would you like to have NTD 5 million dollars, without having to give up any equity or any requirement to pay it back?

The Taipei City Government is encouraging foreign and immigrant entrepreneurs to apply for their grants and subsidies. Following the English-language seminar in June, The Department of Economic Development (DOED) organized another event on November 27th to introduce new incentives and subsidies released in October, and also to announce major changes in application rules that will save Non-Chinese speakers a lot of effort. The most exciting news is that from now on, the proposals can be submitted in English first, and the committee presentation can also be held in English!

Many of the entrepreneurs who Enspyre has talked to in the past have expressed interest in grants but been worried about the amount of paperwork needed, especially since it all needed to be in Chinese. During the grant event in June, several of the questions revolved around these issues.

So it comes as a great relief for the foreign and immigrant entrepreneurs in Taipei that the application can be done in English.

Aside from the incentives and R&D subsidy that have existed for years, there are 3 new subsidies launched this October:

Brands Establishment Subsidy: Creating a brand that attracts customers is the first step to successful business. The brand establishment subsidy can pay you up to 50% of the cost in establishing or upgrading a brand up to NT $5 million.
Innovation Incubation Subsidy: If your company, organization or institution can help nurture new startups or entrepreneurs, you can go for this subsidy. The government offers up to NT $3 million to each project.
New Startups Subsidy: To boost the startup trend in Taipei, the government provides new startups within one year (and also registered after June 12th , 2014) up to NT$1 million, covering up to 50% of the project.
DOED also invited foreign and local entrepreneurs in Taipei to share their own experiences. First up was Elias Ek, CEO of Enspyre, who shared Enspyre’s subsidy application experiences and the great opportunities he sees in the cooperation of foreign-owned and local Taiwanese enterprises. Although Enspyre has a successful record of receiving subsidies, the process was extra complicated since they made several mistakes. “Apply for subsidies based on your actual need, and read through the accounting rules thoroughly, ” Ek suggested. Another speaker was Eddie Wang, CEO of iWant. iWant is an app that helps you to find people with the same interest. With different categories of activities and the GPS function, users can easily find people near them with the same hobbies. iWant received NTD1.4 million in R&D subsidy, and Wang strongly encouragesd all the entrepreneurs present to give it a try. “You don’t need to give up your shares or board seats, and it does not require payback!”

The audience asked questions regarding the application process – “What is the most important element in the proposal for subsidies?” The answer from DOED was “the content of your project, and if it helps generate more work opportunities for Taipei.” Elias Ek also cited the California-style smoothie shop Woogo’s successful example. The government helps pay half of their rent for two years as their business also benefits the community. “What is the success rate of the application?”

The officials answered that according to their experience in the recent 3 years, 40 percent of the companies are selected and offered subsidies.

“Can I apply if my head quarter is located abroad?”
Any kind of company, branch office or rep office registered in Taipei is applicable for the subsidies they provide.

The information about the new grants and subsidies and detailed information will not be available in English until early 2015. But you can always contact DOED to get the information in person.

After the event, entrepreneurs and officials mingled to share each others’ thoughts and experiences. According to DOED, presently around 10 percent of the applicants are from foreign owned companies in Taipei but with less language barriers, they are hoping to see an increasing number of foreign and immigrant entrepreneurs successfully receive subsidies from the government.

What will you do with your 5 mill?